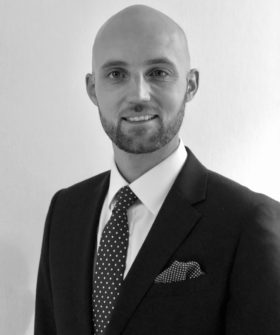 Tom Webb is a civil practitioner specialising in personal injury and clinical negligence matters. He has established a busy practice encompassing both advocacy and advisory work.

Tom has provided representation at courts of various levels, including the High Court and the Employment Appeal Tribunal.

In personal injury matters, Tom represents both Claimants and Defendants on the multi-track. Instructions frequently concern six and seven figure claims. Tom is experienced at all stages of such litigation, from pre-action advice and drafting, through to CCMC and trial. Amongst other areas, cases regularly arise from road traffic accidents, occupier’s liability and claims against employers. Please refer to Tom’s personal injury page for details of recent and notable cases.

Additionally, Tom has built a substantial practice representing Defendants where fraud and/or fundamental dishonesty is alleged. Tom has much experience in the application of s.57 CJCA and CPR r.44.16.

Tom’s clinical negligence practice encompasses a wide range of claims. As well as matters arising from hospital and GP treatment, Tom has dealt with claims against a range of medical professionals. This includes those providing cosmetic treatments. Tom has experience of clinical negligence claims arising in the contest of military service.

Aside from his practice at the bar, Tom has lectured part-time at the Winchester University Law School and provided mooting coaching. He is a former Western Circuit Mooting Champion (2008) and Middle Temple Lowry Scholar (2009/10). In 2016 Tom was appointed as a panel member to the Thames Valley Police Disciplinary Tribunal. In 2019 Tom was appointed as a Fee-Paid Judge of the First Tier Tribunal and assigned to the Social Entitlement Chamber.

Tom Webb is qualified to accept instructions directly from members of the public and professional clients under the Direct Access (or Public Access) scheme.