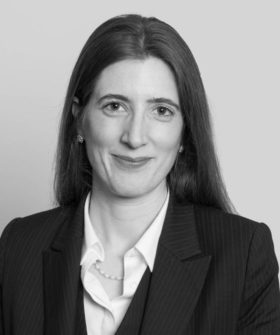 Sarah has a particular interest in discrimination cases, with specific experience of representing clients in matters involving allegations of; sex (including pregnancy-related), race, religion/belief, age and disability. Sarah has also been instructed in actions involving claims of discrimination made by those other than employees under the provisions of the Equality Act 2010.

Prior to joining the independent Bar Sarah was employed as an in house employment advocate for a national law firm. This background gives her a unique understanding of the challenges that solicitors face and their requirements.

Sarah is frequently instructed in complex discrimination cases acting on behalf of both Claimants and Respondents across all protected characteristics.

Sarah accepts instructions on behalf of Claimants and Respondents on a direct access basis whether that be for representation within legal proceedings or otherwise.

To that end, Sarah has sat as an independent investigatory, disciplinary and appeal officer on behalf of employers (dealing with cases up to director level) and also regularly works alongside HR specialists.

Discrimination (finding of fabricated evidence): McCoy v Lyndon Property Maintenance Limited, London Central ET 2016 (Direct Access) – Working in an extremely tight time frame (days) Sarah successfully guided her Respondent client so as to draft statements, make applications to the Tribunal and obtain expert forensic evidence. Sarah then persuaded the Tribunal that justice required the admission of the expert evidence on day 1 of the final hearing (in the absence of prior express permission) and she went on to win the case. In the judgment, the Employment Judge concluded that the claimant’s text messages were in fact ‘created’ for the purposes of misleading the Tribunal and pursuing her case (thus creating ample grounds for a full costs application).

Sarah is able to provide bespoke advice and assistance to Respondents outside of legal proceedings such as drafting, ad-hoc advice, and training (including mock tribunals).

Sarah is able to structure redundancy and TUPE consultations/processes and guide employers so as to ensure that they comply with legal requirements.

For further information about instructing Sarah on a direct access basis please contact 3PB Barristers who will be happy to direct you to either Sarah or the 3PB Clerking team.

Sarah Bowen is qualified to accept instructions directly from members of the public and professional clients under the Direct Public Access scheme.