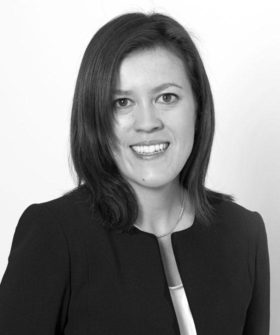 Esther Lieu is a specialist family lawyer with an emphasis on private family law matters and cases involving financial provision following divorce or dissolution of marriages and separation of unmarried couples.

Esther has a busy practice in financial remedies (from pre-nuptial and separation agreements through to contested final hearings), including applications brought under ToLATA and Schedule 1. She is a forceful negotiator at an FDR and balances the costs of further of litigation against the overarching aim of achieving the best outcome for her client. In particular she has experience of the following:

Acted for the husband in a case that involved the wife’s receipt of a significant inheritance at the time of separation, and the death of the husband’s mother during proceedings resulting in his own inheritance (that was tied up with other family members).

Represented the father in an application brought under Schedule 1 CA1989 by the mother for  child maintenance to extend beyond the child’s 18th birthday on account of special circumstances.. Both applications were successfully opposed following detailed analysis of the Child Support Act 1991.

Acted for the Russian wife in protracted proceedings which included successfully obtaining permission to apply for financial relief following an overseas divorce in the Royal Courts of Justice, obtaining injunctive relief against the husband’s attempt to dissipate assets, countering the husband’s father’s claim to a third party interest in the property and achieving a very positive outcome at final hearing.

Esther is regularly instructed in applications for child arrangements orders, specific issue and prohibited steps orders, as well as injunctions, enforcement applications, fact-finding hearings and contested final hearings. In particular, she has experience in cases involving:

W v W (2019)
Represented the father during a 3 day fact-find within a long-running application for child arrangements orders, and successfully defended him in committal proceedings brought by the mother.

B v B (2019)
Acted for the father in successfully opposing the mother’s application to relocate with the parties’ children who lived with her.

S v S (2019)
Acted for the father following the unlawful removal of his children by the mother to Scotland. Successfully obtained an interim order that the children be returned to England and successfully argued (against the mother) that England retained jurisdiction to hear the matter. The children were returned to the father’s care and he was ultimately granted a live with order in respect of both.

V v G (2017)
Acted for the father seeking contact and then residence orders in respect of his daughter in a long running protracted matter in the High Court which included the appointment of r.16.4 Guardian, committal proceedings against the mother (she was found guilty of contempt), a finding of fact (which established that the mother had alienated the father) and the making of Interim Supervision Orders in respect of the child.