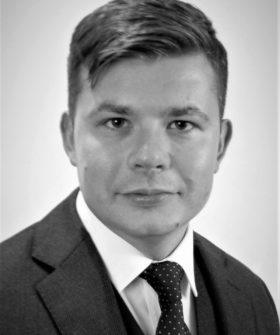 Charles Hogan is an established family law specialist, and brings experience of complex matters beyond his year of call.

Charles has substantial experience in financial remedies, including the dealing with the following issues:

He is alive to issues at the early stages of First Appointment, focuses on presenting the client’s case succinctly and powerfully at FDR in order to obtain the best indication and settlement, and provides effective representation at final hearing where a settlement is impossible.

Charles can assist with drafting questionnaires and practice direction documents.

Charles also advises and represents clients on TOLATA disputes, from the pre-issue stage to final hearing.

N v N – Charles represented the wife in a long-running dispute between two Iranian nationals, with competing divorce petitions in Iran and England. There were substantial assets both in the UK and Iran, a freezing injunction in the UK, and an application under Part III of the Matrimonial and Family Proceedings Act 1984 for financial remedy in the UK after a divorce settlement in Iran.

C v C – Charles represented the wife in a case where the husband claimed that the mortgage had been paid off by a loan from his father. At final hearing, the court heard the evidence of the father and the parties, and Charles persuaded the court that the sum advanced was in fact a gift.

Charles has extensive experience in private Children Act applications, including:

Charles is very experienced at all stages of proceedings, and has a record of successfully challenging professional recommendations at final hearing.

M vs RB and R – Charles represented the second respondent civil partner of the birth mother in an application by the birth mother’s former partner for contact and parental responsibility.

A vs T - Charles represented the father accused of historic sexual offences against children in his application for contact, and was successful at the fact-finding hearing in achieving no findings against the father, and ultimately an order for unsupervised contact.

K vs M – Charles represented the mother in an application by the father for contact, where the father had made threats to kill the mother, and numerous applications to enforce child arrangements orders. Charles secured an order for the father to have supervised contact only.

Charles has considerable experience in representing both applicants and respondents in applications for non-molestation orders and occupation orders, and is aware and provides advice at all times as to how these matters interact with other parts of a wider dispute.

Charles has also represented a defendant in an application for a gang injunction.

B v B – Charles successfully represented the respondent husband, allowing him to return to the family home after an occupation order was granted at an interim stage;

K v K – Charles successfully represented the wife at the final hearing of her application for an occupation order, securing her occupation of the family home;

West Midlands Police v M – Charles represented a defendant in an application for a gang injunction brought by a Chief Constable under The Policing and Crime Act 2009, settling the matter with undertakings given by the client on favourable terms.

Charles has significant experience representing parents at all stages of care proceedings, including multi-day final hearings involving complex issues, including:

Re V – Charles represented the mother as junior counsel in a fact-finding hearing to determine allegations that she committed serious sexual abuse against her children, and had large amounts of indecent images of children on her devices. The evidence included evidence provided by the FBI.

Re T – Charles represented the father in the final hearing of his application to discharge a care order, and was instructed on day two of the four-day hearing after the father had ceased instructing his previous solicitor and barrister. The application was unsuccessful, but Charles succeeded in preserving the father’s current favourable contact arrangements.

Re A – Charles secured an culturally appropriate independent social work assessment of a Ghanian father in care proceedings after the parenting assessment prepared by the Local Authority did not take sufficient account of the father’s cultural identity and beliefs.