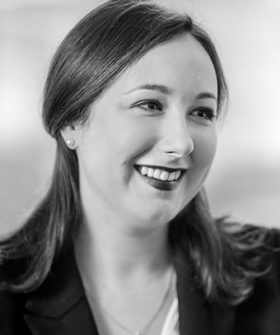 Before joining the bar, Aimee worked on mergers and acquisitions in a variety of sectors including pharmaceuticals and telecommunications. Her experience in M&A means she is more than comfortable navigating parties’ financial arrangements on divorce.

Aimee is often instructed to represent parties where there are arguments involving inherited wealth or pre- or post-relationship acquired assets. Aimee has been instructed on cases where there are disputes concerning companies, trusts, partnerships, third party interests, non-disclosure, inheritance and pre-acquired wealth.

Aimee has been involved with a number of more complex matters including cases involving the Proceeds of Crime Act 2002 and personal injury awards. She has also been able to call upon her expertise in the law of special educational needs (SEN) to assist in advising separating spouses whose children require bespoke accommodation or additional care.

Recent cases Aimee has been instructed on include:

C v C: Represented applicant at first instance and on appeal against leading financial remedy QC in respect of occupation of the FMH.

H v H: Represented applicant in proceedings involving enforcement of child maintenance order from another jurisdiction in the EU. At one stage of the proceedings, the case had been referred to European Court of Justice for guidance on domestic law.

R v S: Schedule 1 application in which the respondent was not domiciled in the UK and had business interests and income streams in Mexico, Belize and other jurisdictions.

H v B v S: Represented the applicant in proceedings involving a divorce obtained allegedly as a result of fraud and forgery of divorce documents. Queen’s Proctor invited to intervene.

T v T: Represented the respondent in an application to vary a ‘Christmas Order’ for child periodical payments.

B v S: Financial remedy proceedings with concurrent proceedings in the Crown Court with the matrimonial assets at risk because of a Proceeds of Crime Act application by the Crown Prosecution Service.

D v D: Financial remedy proceedings made complicated as a result of the application having been made some 15 years after the end of the marriage.

K v K: Represented the Wife in a case where the court awarded her 100% of the identifiable assets as a result of the Husband’s poor litigation conduct.

Aimee is well known for her expertise in private law matters.

Aimee is regularly instructed in complex proceedings involving children which include allegations of physical and emotional abuse, sexual abuse, domestic violence and parental alienation. Aimee is well equipped to handle applications where there has been social work involvement after spending a number of years representing parties in public law care proceedings.

Aimee is experienced in representing parties involved in disputes where there is expert evidence. In her areas of practice, she has cross-examined psychologists including educational psychologists, psychiatrists, occupational therapists, speech and language therapists, physiotherapists as well as teachers.

She has experience of internal and international relocation cases and has provided training to solicitors on pursuing and defending relocation applications. Aimee has an LLM in European Law which makes her particularly adept in this area. She also completed prestigious internships at the British Institute of International & Comparative Law and the International Bar Association.

Aimee has been commended for her personable manner and client focused approach. She always seeks to find pragmatic and cost-effective solutions for her clients.

Recent cases Aimee has been instructed on include:

G v R: Represented a parent in protracted proceedings against a leading QC in which the subject child was recognised as academically gifted. The child’s stellar talent and achievements factored heavily in the arguments raise by the parties. Alienation was also alleged.

D v D: Represented the applicant in private law proceedings against a leading QC. Allegations of domestic abuse and punishment of the children featured in the case. The matter procedurally complex and involved the consolidation of concurrent proceedings in respect of other siblings.

A v D: 7 day fact-find to determine allegations of domestic violence. One party represented by a leading QC.

P v B v P: Private law proceedings in which the child had been subject to lengthy litigation and numerous appeals in Poland. Jurisdictional issues arose as well as consideration of the legal effect of orders made in Poland.

D v H v I: Lengthy private law proceedings with arguments on parental alienation and residence as well as special guardianship and the applicability of a section 91(14) barring order. There was involvement from NYAS.

A v C: Appeal in private law proceedings arising from the court’s decision to transfer residence.

B v B: International relocation in which respondent parent was living outside the jurisdiction.

Aimee Fox is qualified to accept instructions directly from members of the public and professional clients under the Direct Public Access scheme.