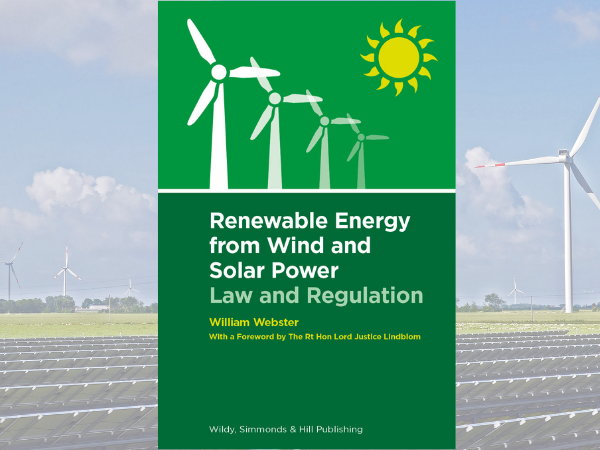 Join the author of 'Renewable Energy from Wind and Solar Power: Law and Regulation' on 29 April for the launch of this seminal new text.

During this free event the author, William Webster a renewables and planning specialist, will highlight the key issues of note from the book in a Q&A style event held via Zoom. Energy sector specialist and Silk, David Parratt QC (Scot) will chair the event.

In a world that is shifting away from fossil fuels in response to the threat of climate change, the UK’s low carbon policies have seen renewable electricity capacity increase by more than three times since 2010. As renewables provided one third of the UK’s electricity generation in 2018 it has meant that the UK has already exceeded its domestic 2020-21 target of 30%. The future is clearly one of unremitting growth in electricity generation from wind and solar farms.

'Renewable Energy from Wind and Solar Power: Law and Regulation' is concerned with the law and regulation of electricity generation in the case of the two most popular sources of energy derived from renewable resources. It covers up-to-date national policy and guidance relevant to electricity generation collected from renewable resources. There is also coverage of the powers of local planning authorities and of the Secretary of State, along with devolved powers in Scotland, Wales and Northern Ireland, in dealing with onshore and offshore energy projects along with the impact of Nationally Significant Infrastructure Projects under the 2008 Act.

This book also covers consents under sections 36 (onshore and offshore wind generation) and 37 (overhead lines) of the Electricity Act 1989 and the grant of FEBA licences from the Marine and Fisheries Agency in the case of offshore consents. The book also deals with the availability of financial assistance for the generation and export of renewable energy to the grid. The second half of the book deals with the basic technology involved in wind and solar power and the planning regime is explained by a number of useful case studies involving challenges to energy proposals.

The author's Preface says: "The book begins with an analysis of what is meant by climate change and the UK’s record in the generation of electricity from LCRS in recent years. It then moves into an overview of the regulatory framework affecting wind and solar developments, with separate chapters dealing with nationally significant infrastructure projects, environmental impact assessment, habitats regulations and national planning guidance relevant to wind and solar developments. The final chapters deal with wind and solar farms and are followed by a large number of recent case studies and commentaries."

This new book will be an invaluable reference for lawyers, planning professionals and operators in the relevant sectors. It will also be of interest to others in showing how the industry is developing and of the regulatory processes involved in securing consents for the commercial development of energy from wind and solar power.

Published by Wildys, 'Renewable Energy from Wind and Solar Power: Law and Regulation' is priced at £95.00.

"William Webster has taken on, and performed, a formidable task. In describing and explaining the complex framework of regulation for electricity generation by the two principal sources of renewable energy in this country – solar and wind power – and in presenting a vast amount of law, policy and decision-making, he has filled an expanding gap in the literature on environmental and energy law. Indeed, he has produced the first comprehensive and authoritative coverage of the subject in a legal textbook.

William Webster’s experience as a practitioner in this area of the law, the care he has taken in organising his material and the clarity of his text will, I am sure, bring this book the success it deserves."