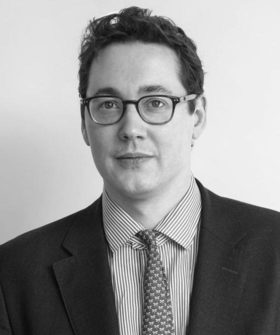 Tom also gained particular experience of fitness to practice hearings whilst on secondment to the Nursing and Midwifery Council as a case presenter.

MCA v Tarmac Marine Ltd
Instructed by the MCA in Prosecution arising from the discovery of asbestos containing material on board the City of Westminster. The Defendant Company were fined £120,000.

CBC v Greene King Ltd
Prosecution of one of the UK’s largest pub chains in respect of a failure to provide up to date allergen information. As a result, a young child sustained a serious anaphylactic shock.

R v BB
Defence of director of food business prosecuted for Fraudulent Trading. Case involved allegations of the mis-selling of bacon as UK produced and free-range.

R v RB
Defence of the manager of an abattoir alleged to have been selling lamb as goat meat.

SBC v K
Defence of food wholesaler in respect of multiple allegations of food hygiene offences in respect of the storage and transportation of refrigerated products.

Cherwell DC v Premier Foods
Prosecution of UK’s largest food producer (turnover £3bn) in respect of food hygiene offences resulting in a mouse being found sliced within a loaf of bread sold by a leading supermarket.

Tom has previously prosecuted, defended and advised in a range of aviation related matters including; an allegation of low flying by a CPL(H) holder during a filming assignment, airspace infringement in Class A airspace, licensing and type certificate infringements by a microlight pilot and an allegation of log book fraud against a senior airline pilot.

Tom has a PPL having learnt to fly during an RAF Flying Scholarship and as a member of his University Air Squadron. He flies his Rollason Condor from Thruxton and has been lucky enough to fly a wide range of aircraft ranging from Bulldogs to an SF260.

Tom has substantial experience in the field of taxi licencing, acting for both Local Authorities, Operators and individual drivers. Notable cases include:

Cherwell DC v Anwar 2011] EWHC 2943 (Admin)
Acting for the successful Local Authority on appeal in important decision on what are relevant and irrelevant considerations in respect of the fit and proper person test.

Re PRC
Acting for largest operator in Local Authority area in proceedings before Licensing Committee. The Local Authority failed in an attempt to revoke or suspend an Operator’s Licence following repeated allegations of drivers being unlicensed.

Tom has additionally acted for both Local Authorities and Companies in respect of alcohol licensing and the licencing of both sex shops and pet shops.

Tom has significant experience representing clients in Health and Safety and Inquest cases. His work has included:

WDDC v G
Successful Health and Safety prosecution relating to an inflatable slide that came free from its tethers at the Swanage Regatta causing injury to a number of children.

CBC v Centre Parcs (Woburn) Ltd
Prosecution of Centre Parc involving an 8-year-old girl who fell from height during a tree climbing activity at Luton Crown Court. The case ended with the Defendant company being fined £250,000.

SBC v N+B
Defending a company with a multi-million-pound turnover in respect of alleged Health and Safety breaches involving lighting levels and the operation of fork-lift trucks.

WDDC v And So To Bed Ltd
Successful prosecution arising from a fall from height involving an unsafe elevated mobile working platform. Fine imposed of £110,000.

HSE v PG Ltd
Prosecution involving serious chemical burns caused by the incorrect use of an Intermediate Bulk Carrier as a reaction vessel to dispose of spent cleaning chemicals.

Tom is appointed to the Specialist Regulatory Advocates in H&S and Environmental Law List.

Operation Swordfish
Successful defence of a former director of a timeshare company on charges of fraudulent trading and money laundering.

PBC v NH
Prosecution for fraudulent trading of an individual who miss-sold advertising in a range of publications that never materialised.

A1 Distribution Limited
Successful prosecution of company supplying electronic goods under the Consumer Protection Act 1987. The case involved consideration of the measures an importer of goods from China should take in order to establish a defence of ‘due diligence’.

WDDC v S
Novel but successful prosecution of owner of residential caravan park under s.9 of the Caravan Sites and Control of Development At 1960.

X Ltd
Advising manufacturer of Moses baskets in respect of prosecution under both the General Product Safety and Toy (Safety) Regulations.

Tom also gained particular experience of fitness to practice hearings whilst on secondment to the Nursing and Midwifery Council as a case presenter. He has subsequently represented Registrants in a wide variety of cases.

Tom Horder has substantial experience in a wide range of complex regulatory prosecutions including maritime and fisheries cases.

MCA v Tarmac Marine Ltd
Prosecution of ship owners in respect of failures in respect of asbestos on board the City of Westminster resulting in £120,000 fine.

Re X
Representing at inquest a Harbour Master following an incident involving a tragic drowning. The case involved argument as to the extent and responsibility of differing agencies, detailed examination of harbour byelaws and the provision of safety equipment.

Re X Sailing Club
Instructed by a Local Authority to advise in respect of a high profile potential prosecution for health and safety offences and gross-negligence manslaughter following the  collapse of a prop resulting in a yacht tragically crushing a maintenance worker to death.

Tom also has particular expertise in confiscation proceedings and often lectures and provides training on the practical aspects of the Proceeds of Crime Act. His expertise as an advocate is recognised by his inclusion in both the Legal 500 and Chambers and Partners Guide to the bar. He is available to provide short notice and urgent advice and is often asked to advise in the very early stages of cases.

Tom Horder is qualified to accept instructions directly from members of the public and professional clients under the Direct Access (or Public Access) scheme.