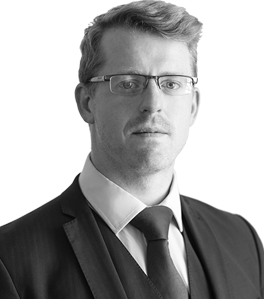 As part of his general criminal practice Jonathan is routinely called upon to deal with complex issues often involving large amounts of digital, forensic and financial evidence and detailed analysis. He believes that whether for the Prosecution or the Defence that every avenue should be explored to make sure that clients – both lay and profession – are properly and effectively represented.

He has been a led Junior for both Prosecution and Defence in matters ranging from attempted murder and national multi-defendant conspiracies to multi-million pound fraud and money laundering cases. He has been called upon to step into the place of his leader in-order to deal with both cross examination and legal submissions.

Jonathan has significant experience in both applying for and defending against a wide range of Ancillary Orders including confiscation, restraint and destruction orders, DVPO, SHRO and SHPO’s.

Whilst Jonathan prosecutes and defends in all areas of general criminal practice his particular areas of expertise are:

Jonathan is regularly instructed to act for the Specialist Fraud Division of the Crown Prosecution Service, as well as HMRC, most often in relation to Social Security and computer-based frauds. He has undertaken disclosure and review work for both the Serious Fraud Office and National Crime Agency. In 2017 he was part of the team representing a former FOREX trader who was prosecuted by the US Department of Justice for conspiracy to fix prices in the FOREX market. The trial ended in an acquittal in the Southern District of New York in 2018; building upon his experience in White Collar and commercial frauds.

Jonathan has also been sought out to advise on other less common frauds pertaining to local authorities and business regulation; notably “airport parking” and “blue badge” fraud. He has particular expertise in handling the restraint, confiscation and asset recovery aspect of cases centring on financial misconduct.

Jonathan has expertise in dealing with all financial matter’s ancillary to his specialist areas of practice up to an including enforcement of such orders. Jonathan has specific experience with some of the most complex and serious proceedings, including in relation to:

He is regularly instructed, for the Defence, Crown Prosecution Service, various Police Forces and HMRC from initial seizure and forfeiture to contested final hearings.

Jonathan has also acted for interested third parties, including private individuals and insurance companies, both to provide advice in relation to rights and standing, as well as providing detailed assistance by way of noting briefs and written application and submissions.

Jonathan Underhill is instructed to prosecute as wide range of Regulatory Crime. This detailed knowledge and expertise is invaluable in his robust defence of private individuals and companies; most notably where such cases fall outside of traditional criminal practice.

Jonathan believes that particular time and care should be taken in the conduct of cases which, whilst still being dealt with by the Criminal Courts, encompass areas of fact and law which are less common within that jurisdiction. Regulatory prosecution is a real and present risk for small and medium sized businesses who are often without their own internal compliance or legal departments. Engaging the appropriate expertise and skill in such cases, from the earliest possible point, is essential to achieve the best outcome.

Additionally, he has extensive experience in confiscation proceedings pursuant to the Proceeds of Crime Act 2002 and is a member of the CPS Specialist Proceeds of Crime advocates panel. As a result, he is able to provide a complete service to clients from pre-charging advice, through trial, to confiscation proceedings. This is particularly important for Trading Standards and Local Authorities as well as private clients who can benefit from complete advice from the outset of their case.

Jonathan’s Trading Standards and regulatory practice includes, but is not limited to:

Jonathan is also instructed to conduct hearings for private clients and via Legal Expenses insurance in all areas subject to Local Authority Licensing including the licensing of hackney carriages, private hire vehicles and liquor licensing. His experience extends from conducting review hearings before licensing sub-committees to appeals and trials before the Magistrates’ and Crown Courts.

Jonathan Underhill is qualified to accept instructions directly from members of the public and professional clients under the Direct Access (or Public Access) scheme.