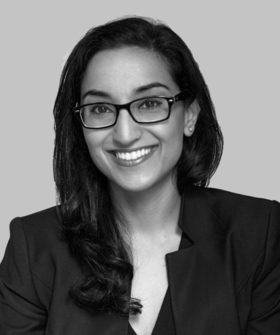 [2010] EWCA Crim 109; [2011] 1 Cr App R (S) 36
The Court considered whether exceptional circumstances exist justifying the court in not imposing the required minimum sentence for the possession of firearms.

Throughout her career at the Bar Sunyana has been instructed on a broad range of criminal work including murders, large cases involving conspiracy to supply drugs, sex offences including indecent images of a child and fraud as well as death by dangerous driving and causing death by an uninsured driver.

Parts of Sunyana’s criminal practice dovetail naturally with her expertise in regulatory proceedings for which she regularly appears in the Magistrates' and the Crown Court (see specialist profile). She has also represented a number of government agencies, undertaking work for Local Authorities, Revenue and Customs, the Maritime and Coastguard Agency and the National Probation Service.

Sunyana is regularly invited to speak to both the Bar and solicitors on criminal/regulatory matters and is happy to provide specialist training if required.

R v. SB (2017)
Represented a well known fashion designer for the keeping for sale and the displaying of a number of endangered species contrary to regulation 8(1) of The Control of Trade in Endangered Species (Enforcement) Regulations 1997.

R v. x [2016]
Defended a youth who was found to be unfit to plead for an offence of sexual assault. Following a successful s.78 PACE application to exclude the Defendant’s ROTI, the case was dropped.

EBC & DWP v. Louise Ellwood [2015]
Successfully prosecuted on behalf of the EBC and DWP a number of offences pursuant to the Social Security Administration Act 1982 for fraudulent benefit claims made over a period of 6 years.  The overpayment of benefits was assessed at being over £75,000.

R v. Shiraz Hussain [2015]
Successfully represented the Crown for an offence contrary to article 137 and article 241(8) of the Air Navigation Order 2009 and section 60 of the Civil Aviation Act 1982 which related to the Defendant shining a laser pen at a police helicopter.

R v. Lisa Heffernan [2015]
Represented the Crown in a successful prosecution of assisting an offender under s.4(1) of the Criminal Law Act 1967 in a violent attack on a passer-by.

R v. MG [2015]
Successfully represented a member of police staff for a number of breaches under the Data Protection Act 1998.

R v. MW & others [2014]
Represented a football fan for violent offences at a Chelsea game.  Avoided a football banning order.

R v. Santosh Gurung [2013]
Instructed by the Defendant on a s.18 GBH for a double knifing in a night club.

R v. CR & RST [2012]
Prosecuted on behalf of the Crown for the supply of Ecstasy at the Bestival music festival, in which one Defendant was found in possession of 120 tablets.

R v Watkins [2011] EWCA Crim 2833
Successfully appealed the sentence of the Defendant from an imprisonment for public protection to an extended sentence in the Court of Appeal for possession of over 20,000 indecent images and the making of indecent images of a child.

R v Michael Kelly and others [2011]
Junior for the Department of Work and Pensions in a nine-handed conspiracy to defraud the DWP and North Cornwall District Council.

R v Ocran [2010] EWCA Crim 1209
Represented the Appellant in the Court of Appeal for an appeal against sentence on whether exceptional circumstances to disapply the mandatory minimum sentence of five years for the possession of firearms.

R v Passoni [2009] EWCA Crim 1217
Appeared for the Appellant in an appeal against sentence in the Court of Appeal for burglary and assault occasioning actual bodily harm on an elderly victim.

Sunyana Sharma is qualified to accept instructions directly from members of the public and professional clients under the Direct Access (or Public Access) scheme.