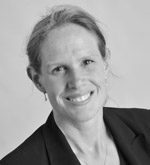 Jo Martin QC was called to the Bar in 2005 having previously qualified as a solicitor in 1996. Prior to moving to Devon, she worked for both the Crown Prosecution Service and the Serious Fraud Office in London and then became a Higher Court advocate, before joining Devon Chambers.

Jo has a considerable and busy practice both prosecuting and defending in all areas of criminal law,  a rape specialist with substantial caseload of large and complex fraud, historic child abuse and rape and causing death by dangerous/careless driving.

She has a particular specialism in child cruelty cases, particularly those involving significant medical issues and linked family proceedings. Jo was, prior to taking Silk, on the Specialist Regulatory Panel List B, prosecuting on behalf of both the Environment Agency and the Health and Safety Executive. Since becoming a Silk in 2018, Jo has prosecuted cases of murder, child cruelty, and a death on a construction site for the HSE.

Her defence practice mirrors that of her prosecution work. She is routinely instructed in large fraud, money laundering and trading standard cases, and the associated confiscation hearings as well as rapes and historic sex abuse cases. She is particularly known for the care with which she handles vulnerable and young defendants.

R-v-Harvey (Jack Frederick) Supreme Court [2015] UKSC 73; Court of Appeal: [2013] EWCA Crim 1104 (defending from the Crown Court to the Supreme Court). The point ultimately dealt with by the Supreme Court was whether VAT that had been paid to or accounted for to HMRC should be included (as the Crown contended) in the gross turnover figure of a company when assessing the level of confiscation to be paid. The Supreme Court held (in favour of the defence) that the VAT should be excluded.

R-v-Elliot Allen [2017] EWCA Crim 458 - successful appeal against sentence passed on a young driver who had pleaded guilty to death by dangerous driving. The sentence was reduced significantly from 2 years 6 months to 12 months.

R-v-Michael Wilkes [2017] EWCA Crim 577 - successful defence against appeal by the Attorney General that the sentence of 6 years and 8 months for an elderly defendant who had pleaded guilty to attempted murder was unduly lenient.

R-v-Worth [2014] EWCA Crim 435 - successful appeal against sentence in relation to money laundering. The judge had erroneously sentenced on the basis of a total amount greater that the amount on the indictment.

R-v-C (Sandy) [2013] EWCA Crim 1815 - appeal against the sentence imposed in relation to a historic sex abuse and in particular whether the court should take into account other sentences that post dated the offending. Appeal dismissed.

AG's Reference no 125 of 2010 (R-v-Draper) [2011] EWCA 640 - defence of appeal by the Attorney General to increase the sentence of a young man who had pleaded guilty to manslaughter of his 4 month old baby. The Court increased the sentence from 3 years 6 months to 5 years.

R-v-Burridge [2010] EWCA Crim 2847 - prosecution junior in response to 4 day appeal against conviction. The defendant had been convicted of murder of his baby who had the classic triad of injuries and rib fractures of different ages. The issue on appeal revolved around 'fresh evidence' relating to the age of the rib fractures. The court ultimately concluded that the conviction for murder was unsafe (and submitted a conviction for manslaughter)

R-v-LG (2019) - Truro Crown Court. Convicted of murder of partner by a single stab wound. Issues involved a factual dispute about whether the victim had stabbed himself and, if the defendant had stabbed him, whether she had done so in either self defence or through loss of control.

R-v-B (2017) - Exeter Crown Court - led by Kate Brunner QC. Defendant had put a potato into the gas flue of his neighbour. Crown accepted plea to unlawful act manslaughter. Defendant received 2 years 8 months which was not overturned on appeal.

R-v-M and others (Operation Fardel) (2017-9) - Harrow Crown Court - leading junior (with Julia Cox) Instructed by CPS South West Complex Casework unit - prosecuting 6 defendants for laundering in the region of £2 million through 'harvested' bank accounts and through the Post Office. The underlying crime was 'phishing fraud': fraudsters got victims to transfer their savings by pretending they were calling from the bank. All 6 defendants pleaded guilty after the case was fully opened to the jury. The sentences imposed ranged from 6 years imprisonment to 12 months suspended. Following contested hearing, confiscation orders in the sum of £1.5 million.

R-v-M (2018) - Truro Crown Court - large DWP fraud with loss to the public purse of some £1.5 million. D constantly changed names, addresses and gave false details about disabilities over an 18 year period to make false applications in his own name and in the names of other people. The defendant pleaded guilty shortly before trial. Sentenced to 3 ½ years.

R-v-S and others (2016) - Truro Crown Court - 6 handed high value 'boiler room' fraud involving the sale of 'rare earth metals' to victims. The REM's, like other so called 'investment opportunities' such as carbon credits, were worthless. The main defendant pleaded guilty, and the financier was found guilty after trial. The victims were all financially compensated following confiscation proceedings.

R-v-C (2019) - Plymouth Crown Court. Led Sally Daulton. Re-trial following hung jury in 2018. Allegation that mother had deliberately smothered her baby in hospital and given her cocodamol. Issue required complex medical evidence about whether the child’s cessation of breathing had been due to mother’s actions or natural causes. Jury acquitted D.

R-v- V and W (2018) - Plymouth Crown Court. Led Sally Daulton. Both parents prosecuted in relation to life changing injuries to 4 month old baby. Charges included s18 GBH and a joint charge of failing to protect the baby. The presentation of the case required detailed analysis of phone records and timings of various injuries to enable the jury to decide which parent had caused the significant injuries. The three week trial ended in conviction of the mother.

R-v-W (2017) - child cruelty case in which defendant was one ot two possible suspects for injuries to child. Defendant acquitted after trial.

R-v-S (2017) - drove mini too fast in Cornish lanes on Boxing Day and killed female passenger in head on collision with another car.

R-v-N - (2018) - Exeter Crown Court - prosecuted for obtaining a mortgage from RBS by signing his wife’s signature 10 years ago. Defence case that the RBS bank manager had been aware and agreed to him signing his wife’s name. Jury acquitted.

R-v-P (2015) - Truro Crown Court - leading junior (leading Sarah Vince) in 10 week HMRC fraud trial with over 40,000 pages of evidence. The accountant defendant had submitted returns for clients to HMRC which were false. Convicted after trial.

R-v-L (2017) - Truro Crown Court - child abuse from over 30 years before. Allegations had been raised before and not prosecuted. Defendant acquitted after trial.

Jo Martin QC is qualified to accept instructions directly from members of the public and professional clients under the Direct Public Access scheme.